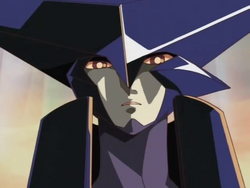 Melan Blue, is a monomakia who is the deuteragonist of Brigadoon: Marin and Melan. He is Marin Asagi's protector.

Melan while mostly clueless about the way people on earth function, is a kind, calm individual. He is shown to get defensive if anyone harasses or attacks Marin in his sight. He has a soft side for Marin and is able to learn about the world from her.