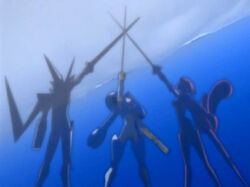 Deep Blue Monomakia is the second episode of the Brigadoon: Marin and Melan anime.

Marin Asagi is rescued by Melan Blue. She is safely taken back to her home. The family are relieved to see her safe at they meet Melan, who explains that he comes from a planet called Brigadoon. Later, Moe Kisaragi comes over and sees how Marin lives and how hard her life is as she observes the clothing on the clothesline. She has dinner with Marin and her family, but is later worried when she hears that she may get arrested. Later, Isshin and some other kid are seen smoking as Isshin tries to check what panties she is wearing today, but Melan intervenes and scares Isshin and the other guy off. Marin explains that he can't just randomly kill people, which he understands.

Marin then hears that there are three robots after her and she flees, but is almost hit by a train. The robots corner her, but Melan saves her as they fight off the robots and are victorious. Marin is then taken home by Melan.